Things are nearly back to normal here. Dougy has two more treatments for his eye infection, then he doesn’t have to fret about goop and drops in his eyes till the next time! I’m still unable to get a good photo of how his right eye looks now, though the photo above is nearly the one I’ve tried to capture.

Yes, things are nearly back to normal. Dougy just chased Andy off the right arm of the recliner and claimed it for his own. Just like normal!

Here’s Dougy trying to keep the right eye tightly closed so I can’t put the drops and gel in his eye. Silly kitty! All I have to do is spread it open with my thumb and index finger. The process is simple, fast, and, once I have Doug “cocooned” in a towel, he is a perfect patient! That said, he and I will be pleased to finish the treatments today, his and mine – I’m on an antibiotic for my dialysis fistula now, too.

Dougy doesn’t cooperate by facing the camera, but this gives you some idea (from yesterday) of the healing progress of his eye. He does hold it open all the way now (Sunday), and continues to be a good boy when it comes time for his medication.

The area around the eye looks a bit rough because of the antibiotic gel that gets on it. Dougy seems to understand the medication is good for him, which makes me think his eye feels better after I put it in his eye. He has five more treatments.

Dougy’s tail tells me to lay off! Caturday is for relaxing!

Dougy isn’t thrilled about being held on his back under any circumstances. Unfortunately, that is the best position to hold him to medicate him. For that reason, I have to wrap him in a large bath towel to put the gel and eye drops in his eye.

The gel is a pain, and, if Dougy moves his head just a little, the gel ends up on his face. The drops aren’t as difficult to manage. Regardless, I got him medicated and we have just till September 30th to suffer (yes, both Dougy and me!) this need.

I was worried he might become fearful of me because of this, but the medication must make his eye feel better because he’s his old buddy-buddy self with me. Whew!

Yes, I tickled his toes.

Dougy has an eye infection that requires five days of antibiotic gel and corneal repair eye drops two, three times a day. Lucky Dougy, lucky Doug! Fortunately, he doesn’t bite or scratch while being medicated, but he does perform a contortionist routine that makes it difficult to get the gel and drops past his tightly clenched kitty eyelashes. I will win! (The corneal repair drops say they are a gel on the label, but they actually are a liquid)

Dougy’s blood analysis indicates he is a healthy kitty, with one characteristic slightly out of normal range. I was concerned about his weight, which has dropped about 10% in the past three years. Though that doesn’t  show up as diabetes in his blood work (whew!), I do hope to help him put some weight back on. I personally think  the problem is he’s not food aggressive enough to get his share of wet food and treats. Andy is! (Andy on the other hand, feels a bit trending toward “tubby”….)

I was encouraged that Dougy was his usual at the veterinarian clinic Wednesday; He always hops off the examination table to explore the room! He’s done this since he was a wee kitten, and some things never change. He is my little explorer!

While Dougy’s in treatment, I may post less about him. That eye looks a bit gross, especially since the antibiotic gel that doesn’t get in his eye the first time or two has to be wiped off his fur, leaving a greasy mess. Until I get my doctoring skills up, a certain part of the gel will be wasted in failed attempts to get it in his eye. 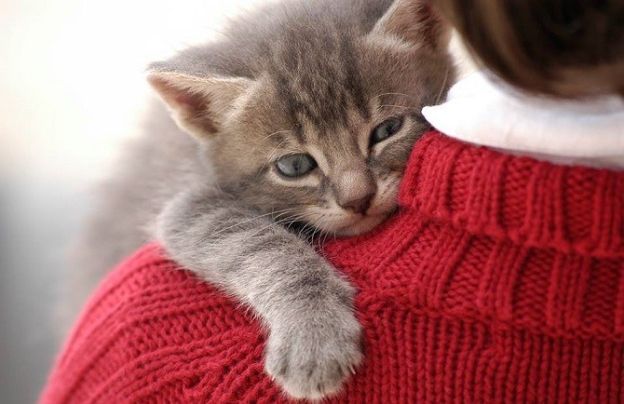 Cats are furbabies after all.

via Study: Cats Really Do View Us As Parents — Pain In The Bud

Tedious! I have to wear a heart monitor for 24 hours and document any anomolous moments – light-headedness, pain, whatever….

Andy is not sympathetic. He has a heart murmur.

Fortunately, it’s not too heavy, big, of difficult to wear. I thought I heard “three days” when they told me I had to wear it, though it’s actually 24 hours. Whew!

Good thing I have a kitty cat to reduce my stress level till then! Thanks, Andy!

Andy enjoys the kitty videos when I play them, though it frustrates him when he can’t catch what he sees on the screen.

But a kitty can dream, can’t he?

I tried to get nice photos of Andy, but they all turned out looking like mug shots.

See what I mean? LOL!

An available kitty (Andy) always demands human intervention: I want to do for Andy what I did for Dougy yesterday: Give him a major “scritching”!

My hand approaches Mr. Andrew with caution. Don’t know why, but something about set of his whiskers suggests it is a wise thing to do unless I want to get…

…the “Staggering Soul Sucking Hind Foot of Total Rejection”. Not me, Andy! I “wuv” you! Awww! I am crushed. Yes, he pushed my hand away!